Alaska tents and a castle left by Alex the Great... 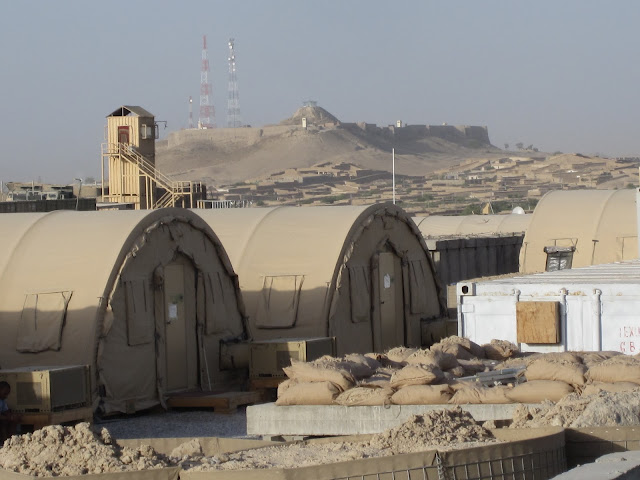 So, this is another view of Lagman - the same FOB where the B HUTS are. In fact, when I took this photo I had just exited my B HUT intending to saunter over to the DFAC, see if the hens were laying, and score myself a yummy eggwhite omelet with veggies. Struck by the grandeur of the view and fascinated by the juxtaposition of ancient versus new, permanent versus transient, I put the old rumbly tumbly on hold long enough to snap this pic. In the distance, ruins of a castle said to have been built then abandoned by Alexander the Great on his way to India, lord it over the surrounding landscape. This massive structure, appears to have just sprouted up out of the sand. I found it bizarrely reminiscent of the crystal gardens my first graders used to make by pouring laundry blueing over charcoal brickets - only beige. Everything here is beige...land, vehicles, clothing...Anyway, rumored to be about 2000 years old, this fortress used by Greeks, Russians, British, Taliban and now Americans, catches both eye and imagination.  In the mid ground of the photo, squats Qalat with its typical walled compounds, mud huts - home to about 10,000 inhabitants some of whom come to Lagman daily to work in the kitchens, pick up and haul trash and perform other types of labor. I hear Afghan workers make about a dollar an hour and if their occupation becomes known to the Taliban, they quit, run, hide or forfeit their life. A couple of Alaska tents dominate the center of the picture. They are the new Quonset huts and the Cadillac of living and working quarters in Afghanistan. Each Alaska tent comes in its own seaworthy container and each has its own ECU...environmental control unit (I think).

Qalat is just outside Lagman's defensive boundary walls. Our military fortifications here in the big sand box  remind me of the "dead zone" that grew up between East and West around the Berlin wall and the one between North and South Korea as well. A exterior perimeter border of Hescos topped with coils of concertina wire surrounds a wide swath of no man's land bordered by a second internal perimeter wall of Hescos and barbed wire. Hescos are those square dirt holders you can see in the very front of the picture above. They are basically wire cubes with a heavy fabric liner. Once filled with the most cost effective and plentiful local building material...dirt and rocks,  Hescos can be useful for all manner of things - boundary fences, road reinforcement, erosion control, bunkers. I have even seen guard towers made completely of Hescos. In my humble Combat Granny opinion, Hescos make much better sense to use in building bunkers and guard towers because unlike concrete T walls which require movement by crane and which are not really as mortar proof as one might think, Hescos filled with loosely packed particulate matter, when hit,  just compact themselves and benignly absorb any concussive force. Concrete tends to shatter and spray the vicinity with sharp fragments. 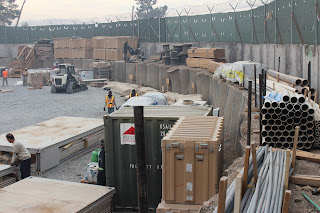 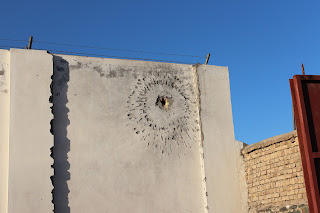 Camp Nathan Smith experienced an all day attack the day before I arrived there to work. The perimeter was overrun, the warlord and his nearest and dearest were conveniently "away" for the day, and the camp took heavy shelling for about 12 hours. It probably would have been a lot shorter in duration but I am told that our Army guys wanted to let the local ANA (Afghan National Army) on the base take care of the problem. Eventually when that proved ineffectual, the Army guys just went out and ended the whole ordeal. A tent took a direct hit though during the skirmish and a young soldier lost his life. Anyway, the pic on the left shows where the wall surrounding the Materials Yard took a hit. The shell produced kind of an interesting pattern, sunburstish or oddly flower like...a dandelion puffball shape... but clearly this pattern illustrates the point about how concrete performs under impact. In the picture on the right, you can see exterior T-walls surrounding the two other sides of the same  yard with an inside liner of Hescos to back them up. This arrangement made great pipe and lumber racks effectively keeping these bulk items up and out of the way and further lent itself to the convenient storage of spool wire, empty Alaska tent containers and other large items - which would have taken up needed space in the yard's interior working area. As an added bonus, walking around on the Hescos provided an interesting vantage point for taking pictures of the locals just outside the T walls. I often wonder if they think about what we do inside our walls as much as I wonder about what life is like outside them. 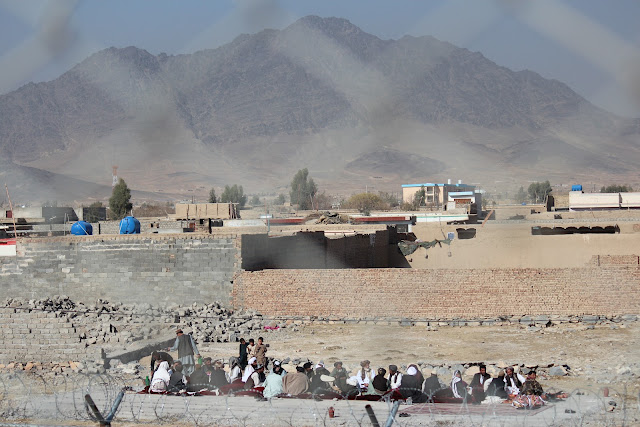 I found what I thought was a pretty interesting website that tells the story of Alexander the Great's journey through Babylon and Afghanistan. The link follows in case there is interest:
http://www.awesomestories.com/flicks/alexander-great/alexanders-journey-in-pictures
Posted by Combat Granny at 7:28 AM

Combat Granny
I used to teach military kids in Germany and Japan before I retired in 2008 to become a lady of leisure. I tried it...it didn't take. The hubster, who prompted our mutual retirement got tired of spending his days on the couch watching random sports and took a job with DynCorp as a contractor in Afghanistan. It took me longer. I thought...well, let him be the breadwinner and I will sit in my lovely house, watch home and garden TV, play with the kids, grandkids and parental units and shop at Ross every Tuesday. As I said...it didn't take. I went to work for Central Texas College in Baghdad, Iraq on Camp Victory. After I completed that 6 month commitment, Pete said he needed a roommate in Kandahar and indicated he would rather it was me. I had rather it was me too, so I went to work for DynCorp and headed to Kandahar myself. My job is as a mobile trainer of logistics software and I get to fly around to different forward operating bases on Russian helicopters (and the occassional Black Hawk) building credibility, making friends and influencing people. This life and this job would not be for everyone, but I find it oddly compelling.